In this application note, we discuss how “real world” signals differ from “ideal signals”, and how they apply to our software defined radio (SDR) systems. We will first cover the basics of IQ signals and mixers, and then mixing artifacts, spurs, IQ imbalances, compression and intermodulation (i.e. phenomenon which will also appear besides your desired or “ideal” signal). Much of these phenomenon can limit the dynamic range of the system. Secondly, we will discuss how these phenomenon can be mitigated through various calibration and/or correction algorithms.

IQ signals (commonly “IQ pairs”) are easy to understand, as it’s simply two signals which are 90° out of phase or orthogonal to eachother, i.e. a 1/4 cycle. The I stands for “in-phase” and Q stands for “quadrature”. In fact, a consine and sine wave are quadrature waveforms. 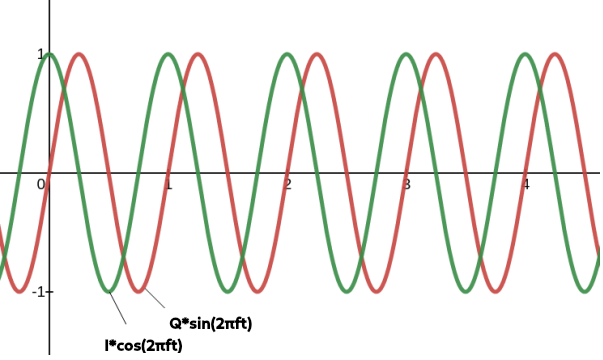 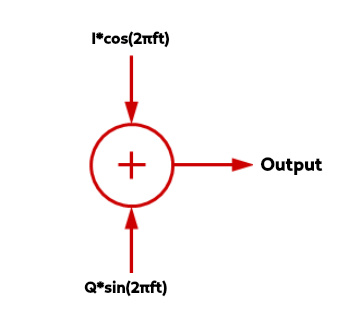 As an example, if we were to say I=1 and Q=1, then we’d have a new waveform in black shown below: 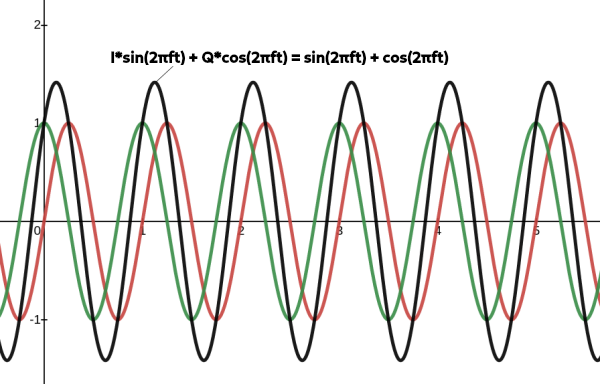 In general, if I or Q changes or varies, the result are changes in amplitude, phase and frequency modulation of the sum. Essentially as the I and Q vectors change, the magnitude of the vector sum changes. The GIF below shows how this works using a phasor diagram– another way to visualize IQ signals:

Figure 4: How Adding I (x-axis) and Q (y-axis) Changes with a Phasor Diagram

Now, knowing how the complex plane works, and making our IQ signal a function of time, we can see that IQ pairs can be represented by a famous formula, Euler’s formula:

To control how the I and Q signals are modulated/demodulated, the use of a IQ modulator and IQ demodulator is needed, which essentially mixes an LO frequency from 0-90° with the I(t) and Q(t) signals, as shown in the following block diagrams: 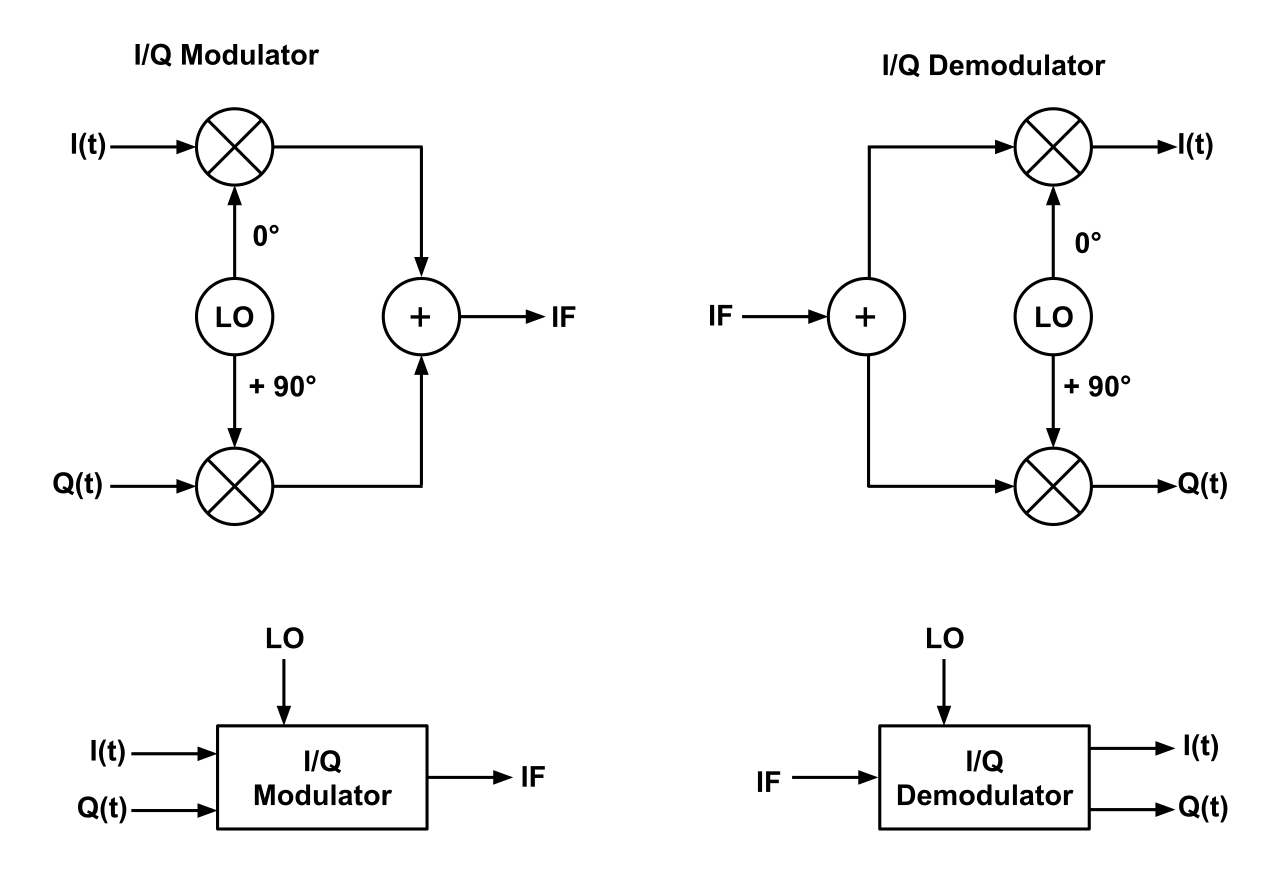 In Figure 6 above, the two bands on either side of the LO are referred to as sidebands (i.e. two regions where the upconverted RF signal is). We tend to refer to the (left) lower sideband of the LO as the image sideband. Often, you only want one sideband, and you need to somehow filter or cancel out the other. In upconversion, we can accomplish this by using a standard mixer with a filter, or a single side-band (SSB) mixer using a Hartley modulator, which will use phase manipulation and thus eliminates the need for a narrow-band filter to take out the unwanted sideband. For downconversion, the use of a standard mixer with filter, or image reject (IR) mixer, will allow for the removal of the unwanted images. IQ mixers go a step further, and allow you to filter out this image within the mixer itself, as will be explained below.

An IQ mixer consists of two mixers where the RF (or LO) ports are connected with an in-phase power divider and the LO (or RF) ports are connected with a quadrature hybrid. The two IF ports, I for the in-phase component and Q for the 90° out-of-phase component, are available to the user. This combination allows the in-phase and quadrature components of the output signal to be modulated independently with each IF port. IQ mixers use phase manipulation to suppress unwannted signals instead of expensive filters commonly used, as described in section 4. 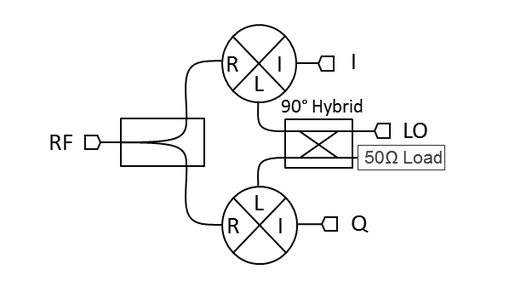 An IQ mixer can be understood by observing the schematic in Figure 6 above. Essentially, it consists of two regular mixers and a quadrature hybrid coupler at the LO. The hybrid coupler splits the signal of the LO into two output ports, with a phase shift of 90° in one of them. In upconversion, each of these outputs is either mixed with the I signal or the Q signal and then both outputs are combined in the RF port. On the other hand, if the mixer is used for downconversion it will allow to retrieve both I and Q original data signals in the RF input.

How this works to suppress sidebands is discussed in sub-section 4.2

The mixer ports, as shown in the bottom half of Figure 6, are designed using circuit symmetry, such as a hybrid junction or combination of these, to balance the mixer (i.e. create isolation among ports, cancel intermodulation mixing products, and so on). Still, however, there are noticeable artifacts in the frequency domain such as LO feedthrough, IF feedthrough, and sideband/image formation.

During upconversion in the Tx chain or downconversion in the Rx chain, an image frequency is generated where the desired f_{IF} or f_{RF} is located, as in Figure 6. With real mixers, we often use a filter to get rid of the image sideband if it’s not within our desired signal bandwidth. However, in practice, this is not possible, and we want to suppress this image by employing phase cancellation during mixing/conversion (i.e. ‘direct conversion’).

Assuming that our mixers act as perfect multipliers, and our signals have amplitude of 1, I=cos(2 \pi f t) and Q=sin(2 \pi f t), we can mix I with cos(2 \pi f_{LO}t) and Q with sin(2 \pi f_{LO}t), and use the sum/difference trigonometric identities to obtain the following:

A microwave or RF mixer will produce not only the desirable 1 f_{RF} \times 1 f_{LO} frequency product, it will also produce every arithmetically possible frequency component. Any frequency expressed as m f_{LO} + n f_{RF} will show up as an output of the mixer. All products besides the desired 1x1 product are called ‘spurious’ mixer products, or spurs for short. Most mixer circuits will suppress many of these spurious products by using balancing techniques. However, at certain tuning and LO frequencies, these will appear in your frequency spectrum.

A DC offset between the I and Q waveform is an conversion loss imbalance between the two mixers inside the IQ mixer. The main consequence is that when performing upconversion with the IQ mixer a certain amount of the LO signal will leak in the mixer RF output. The LO to RF isolation, one of the metrics of an IQ mixer, quantifies this carrier leakage. This offset will introduces carrier/ RF leakage into the frequency domain plot of our signal. It will thus cause issues for us when performing IQ modulation/demodulation. 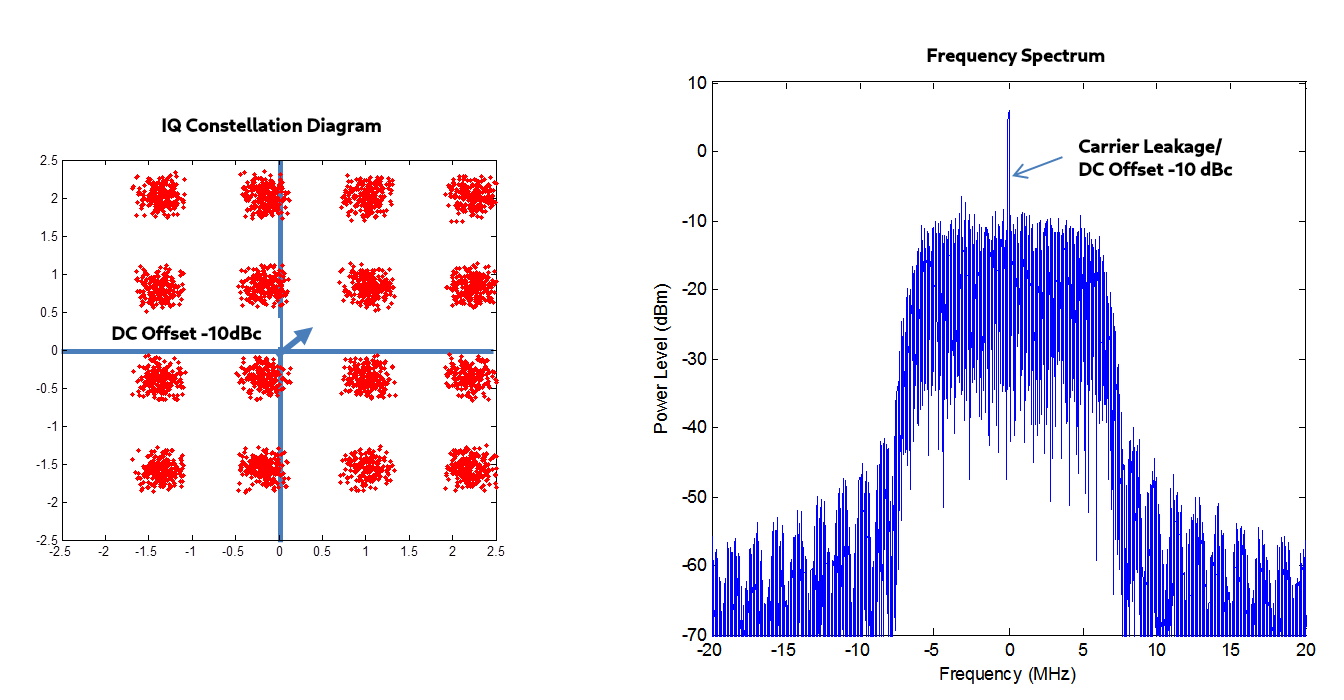 The phase will always vary more with higher frequency IFs than with lower frequency IFs due to the same time delay becoming a greater phase delay at high frequencies, as shown in Figure 12. 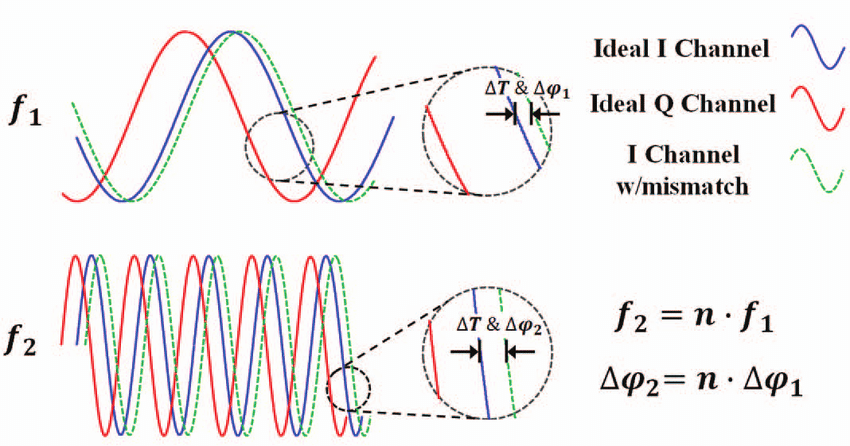 The effect of this can be seen in constellation diagrams, where deviation between a modulation schemes ideal points and those found in the real world– i.e. error vector magnitude (EVM). Figure 13 below shows this:

Figure 13: Effect of Phase and Amplitude Imbalance on a IQ 16-QAM Constellation Diagram 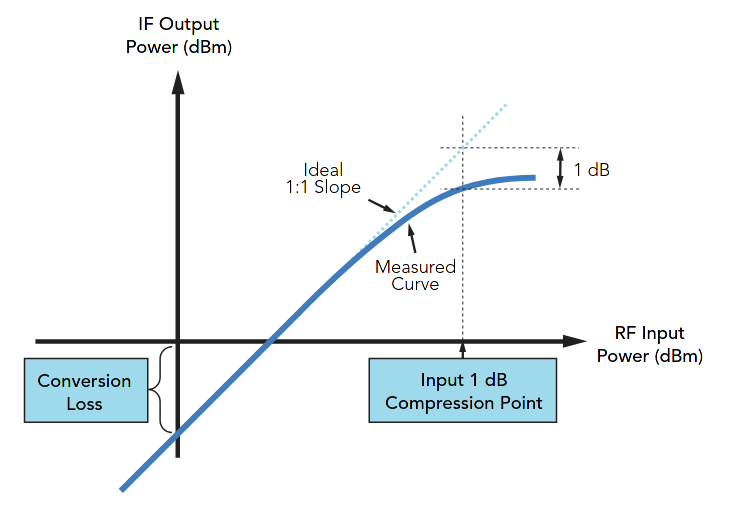