More information on the architecture behind Crimson TNG may be found in the section on System Architecture.

This section explains the procedure to update the MCU firmware, and configure the FPGA firmware to program the MCU.

The capability exists to update this code through the existing UART interface; the optimal update method takes advantage of the exposed SATA headers to directly update the Atmel Controller. The following provides the recommended procedure to update the MCU firmware.

In order to automatically update from Crimson TNG, you require;

Unless otherwise instructed, you should follow the automatic update instructions to help ensure a smooth update process.

Here is an overview of what this process entails:

You can use git to clone the latest releases repo as follows:

After cloning the releases repository, fetch all the remote tags by typing:

In general, the latest release shall be available on the master branch, but you can see a list of previous releases using:

And you can check out to those releases by typing:

After cloning and checking out to a specific release, enter into the release repository, to find appropriate binaries for RTM4 and RTM5 releases.

Copying the release package to Crimson

You may use SCP, from within the releases repo, to copy the appropriate release to Crimson. Assuming the default Crimson IP address of 192.168.10.2, and after selecting the appropriate RTM4/5 packages;

You will be prompted for a password, which is the same as the one you were previously provided with.

If you are only using the low band stage, or would otherwise like to skip the LUT table generation process, you may append the “nolut” arguement to the update command. In doing so, you will skip LUT generation.

After the SDCard image and FPGA image have been update, and the server has come up again, (which can take up to 10minutes), you should see something similar to the the following output, but with version numbers that reflect your release;

The unit will now automatically start to re-generating the look up table.

If you are only using the baseband (low frequency) chain, the update process should now be complete, and you may now reboot the Crimson unit;

By default, after running the update utility, a look up table is re-generated.

The Look Up Table (LUT) generation process optimizes the high frequency chain of your particular Crimson unit and is unique to your specific Rx and Tx boards and radio chains.

The process to manually force the regeneration of the Look Up Table follows;

During the LUT generation processs, you will not be able to use Crimson.

It will take approximately 30-45 min to fully complete this process.

The process is complete when the bottom LED on the crimson unit stops flashing.

While logged on to the Crimson unit, you may observe the current LUT generation process status by typing;

The log results will indicate the radio chain, frequency and offset you will need, and are automatically used in the calibration tables.

To identify the correct version of UHD, select the branch or release that shares the same release tag as the one you selected when updating Crimson.

You can always determine what UHD version you have installed, by typing;

Instructions on how to compile UHD from source can be found here.

For the changes to takle effect, you will need to reboot the device.

If the automatic update doesn’t work for you, there are other options. Contact us for more help on these matters.

It is also possible to update the FPGA firmware using the command line, or directly over JTAG using a USB Blaster.

Updating firmware using the USB Blaster is not recommended if you are also using the SoC, as it may adversely impact SoC operation.

The settings illustrate the conversion of the default (.sof) file format to the desired raw binary file (.rbf), with a mode of Passive Parallel x16, and an output filename of soc_system.rbf. 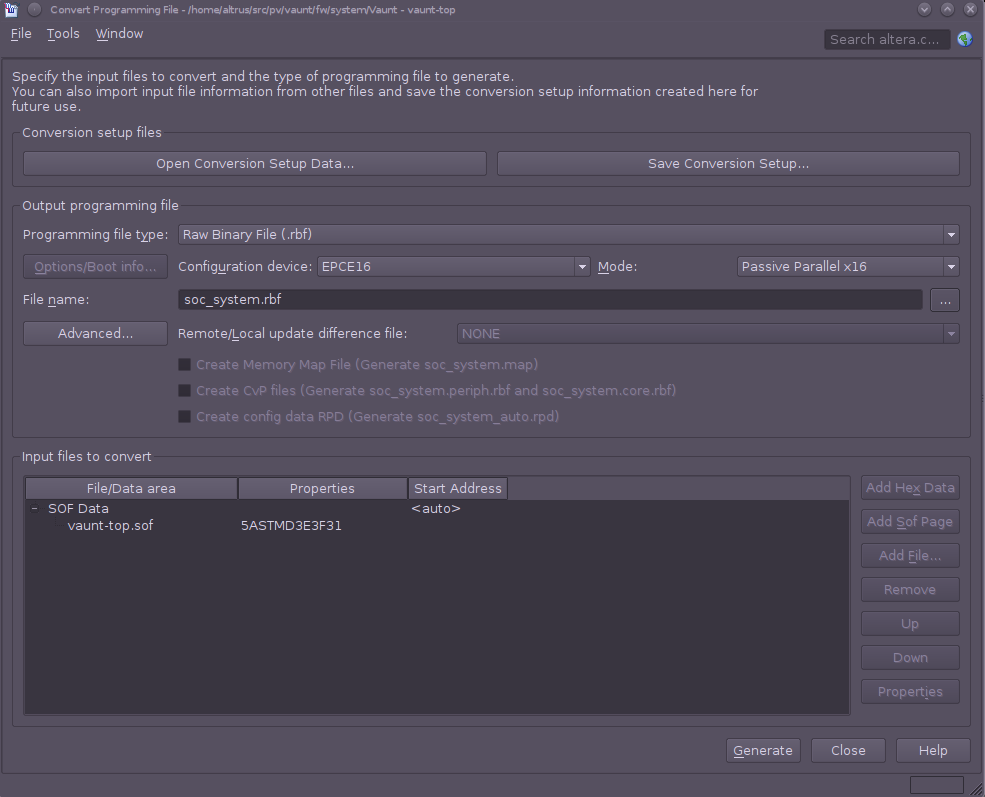 You must ensure you cleanly unmount the partition. You risk corrupting the firmware image (and possibly even Crimson TNG) if you simply remove the USB key without first unmounting (safely removing) the USB key! For added security, type sync to flush file system buffers prior to removing the SDCard.